I created my first hand-knitted seamless sweater as another approach to zero-waste fashion design!  I learned how to knit when I was 18 from a book, how to do purl, stockinette, and ribbing stitches while I was at UC Davis, but I only knew how to do simple scarves. I considered myself a beginner knitter since I only knew how to do scarves, but through all the practice of basically knitting rectangles for 5 years, I got really fast at it. I really wanted to gain a new skill in knitting because most of my clothing is knits, and I was surprised that I hadn’t learned how to make an entire knit garment  even though I’ve been in fashion programs for the last 7 years (high school-grad school).

I was excited to see that there are knitting classes offered at Knitting Etc. in the Triphammer Mall in Ithaca. I think that the small community setting, and value given to hand-crafts in local stores throughout the Commons really inspired me to pursue knowledge about hand-crafted knitting clothing. I met with the knitting instructor additional times out of class to get extra help and avoid mistakes. Through this experience I learned that I do not do the knit stitch in the convention manner, and add an extra twist that can make the fabric appear more textured. I also learned what knitting in the round means with circular needles for the body, and by using several double pointed needles to form the sleeves. One of my favorite parts was learning how to do the special stitches for the center panel that include the twisted knit that are the protruding ribs along the sides, and the cable design along the center of the sweater front. 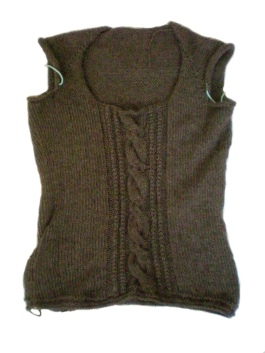 The class began in mid-January and I finished the seamless sweater in 2.5 weeks. I was very eager to finish the sweater so that I could present it as a finished garment to in my apparel design graduate seminar. I sat down for hours during the day and night to try to finish. In my process of making the sweater, I really appreciated the daylight because it gave everything I was doing more clarity. Not only could I distinguish my grey yarn and brown needles better, but I also felt more alert. I felt more confident that I wouldn’t make a mistake during the day compared to when I knitted when there was no daylight and I worked under fluorescent lighting. It took about 74 hours to finish this sweater, but I am very happy with the outcome and am looking forward to making it again as part of my thesis.

I spent days knitting for 7-9 hours at a time right next to a window and realized that I spent less than 5 minutes looking outside. Each time I did get up and walked back to the couch, I did look outside to see how much the snow on the roofs melted as the day progressed. In the morning, there were blankets of white snow on all of the roofs, toward the afternoon some of the snow melted and I could see the color of blue and brown roofs, and depending on the warmth/ coldness of the day, there was some, or no snow by the time the sunset. On this particular day, there was more snow on the roof in the afternoon because it was snowing.

I didn’t think much of this at the time, but it’s not everywhere that you can see what is on top of someone else’s house and how it can change throughout the day or week. I appreciate my view from my apartment much more now, especially because the homes are built on a hill and I can see the roofs of many homes. This is a unique sight to Ithaca and I am very lucky to be exposed to it. San Francisco has a lot of homes built on hills, but there is no snow to be able to observe what I have. Above are images of what it looks like outside my window. The window screen created the grid effect. I think this adds more character to the view because it’s a reminder that I’m not “naturally” exposed to this view, I’m live on the top floor of an apartment, and the existence of the building is the only reason why I am able to take the photograph. The screen grid is a symbol of urbanization that has developed in Ithaca, a place that was simply once snow and trees during winter.