With population growth, there is greater need for basic resources. Energy is a basic resource that is a part of our everyday lives. In Los Angeles, I experienced a few black outs, but electricity returned within 3 hours. In Davis California, I experienced one and remember using a flashlight so that I could do my work. At that point I realized that I had taken electricity for granted.

I remembered visiting El Salvador when I was 7. There was a limited  supply of light at night and the further out I got from the lighted room, the more difficult it was to see outside. On my way back from the bathroom, I was trying to touch everything around me so that I wouldn’t bump into anything. I touched pointy, rough surfaces, and realized that everything was easier to do with light. Until recently, I didn’t know many resources are required to generate electricity.

Brazil experienced a “Blackout Crisis” from June 2001- February 2002 and  since then has developed several hydroelectric dams. An NPR report indicates that Brazil will have to build two enormous dams every year to meet its energy needs. Hydroelectric dams are the preferred energy source rather than biomass or wind power that may not have as drastic affect on the rainforest ecosystem.

The Belo Monte Dam is being constructed along the Xingu River in the Amazon forest . A report from Mother Nature Network indicates that the dam can affect 26 indigenous tribes, displacing 20 thousand people. The dam would be the third largest in the country and the 14th largest in the world.

Below is a photo of a woman in the Invasao dos Padres neighborhood who lives in a house built on stilts that helps protect it from flooding.  (Photo Mario Tama) 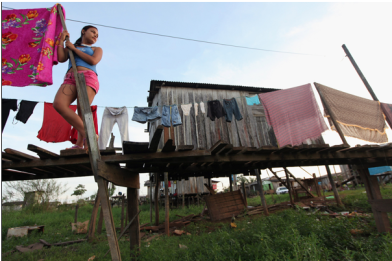 Several tribes protested against the development of the dam. Below is a photo from 2009. The indigenous residents protested on a temporary earth dam on Xingu River, they also removed part of the temporary land as a symbol of their objection.

The creation of dams in the Amazon have already had negative affects on ecosystems and human livelihoods. The Paranatinga II dam is considered to be a small dam and has led to the disappearance of fish in the Upper Xingu area. Additionally, the creation of the Ticuri dam has displaced 3,700 people.

The Kayapo tribe is known for protecting the rainforest and oppose the construction of Belo Monte:

The voices of indigenous people with extensive knowledge of the land and ecosystems, do not seem to be  heard. Notions of “progress” may be blinding the rest of the country as more dams are being constructed and access to more electricity is possible. Tribes presented a document to a federal judge that stated, “We do not want our fish and our animals dead, and our children going hungry.” Despite their knowledge and negative ecological/ social affects  induced by the construction of the Paranatinga II and Ticuri dams, the Belo Monte is under construction.

With loss of their land, several groups may have limited or no access to materials that help them continue their cultural traditions. In the Kayapo tribe, feathers of Macaw birds are used to decorative headdresses for rituals. In the Kayapo, body painting is used as expressive clothing. The painting symbolizes identity, family ties, age, gender, marital status, and unique motifs to the specific tribe. The jenipapo fruit and urucum seeds are used to create the black and red ink. If the Kayapo have no choice but to re-locate, will they still have access to the fruit for inks? Will the tradition of using body painting as a form of clothing continue, or would they shift towards accepting social norms of what clothing is? Material representation of culture may not be the only aspects of culture that are lost, language and a unique perspective of the world are also at risk.

The indigenous tribes deserve the right to continue to practice their long-lasting cultural traditions in their land. Since dams have proven to negatively affect Brazilians and surrounding ecosystems, the construction of more dams must be avoided. Other alternatives such as biomass or wind power must be pursued. Analysis of the plausible impacts of the alternatives is essential to prevent damages.