An update about the NY Fiberscape Dress that I wrote about earlier in the summer. I knitted some swatches with stockinette and cable stitches to figure out the knitting gauge. I liked how they both turned out, so I decided to make the dress in stockinette stitches, and create the cables in a knitted cowl made of New York yarns.

So far, I’ve used 596 yards of my handspun yarn for the NY Fiberscape Dress. I had to spin additional yarns, and am still in the process of creating more yarn to finish the dress. The yarns I need are for the lower half of the dress and sleeves. I am using a dark brown romney/ alpaca blended yarn from the Crazy Legs Farm in Fort Edward New York. For the neckline, I am planning to use my handspun yarns from the Quarry Ridge Alpacas in Salem New York. I’m hoping to finish the dress by the end of September. I am also collecting narratives from farmers about the fibers, animals, and farms to include as informative hangtags to go along with the dress.

The cabled cowl is 100% alpaca fibers, and has a variation of natural colors from black to brown and white. The alpaca fibers were sourced from Alpacas of Breezy Hill Ranch in West Hebron New York, and a dual farm and mill Riverside Alpacas/ A+ Fiber Mill, which I found at a booth during the Empire Farm Days in late July. I spun the yarns using a similar color blending technique as the sweater dress, which resulted in a striped color variation. In total, I will use 188 yards of yarn for the cowl.

Alpaca during the Empire Farm Days, 2015 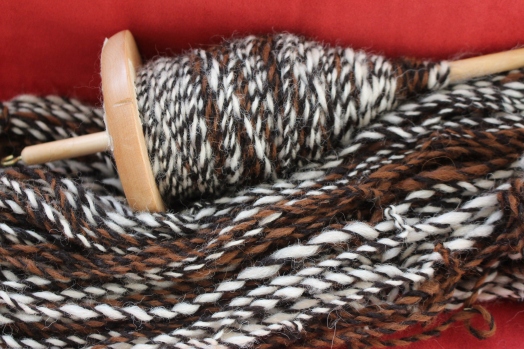 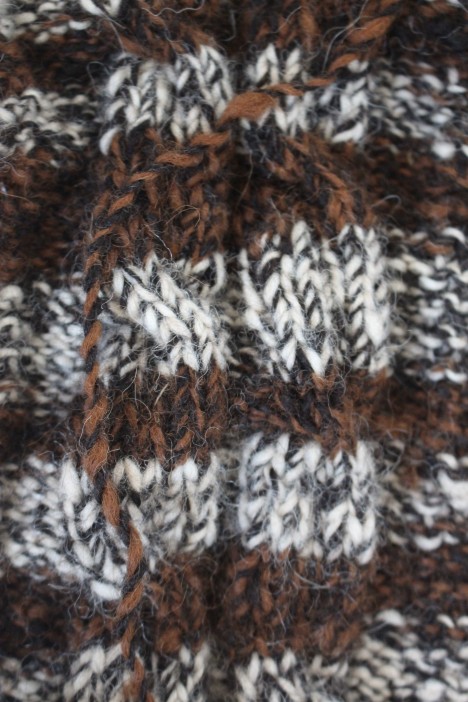 The process of creating these Fiberscape pieces has been long, especially since I’ve been spinning the fibers into yarn. It is very rewarding to use yarns that I designed and created by hand. This provides extra motivation to finish the pieces since I’ve already invested so much time and effort. Spinning with lincoln longwool, romney, cormo, merino, and 100% alpaca fibers has been a new experience, and I’m happy to take time to spin and knit with these amazing fibers while learning directly from farmers about their animals. More updates to come!