In a recent visit to California, I was very excited to see the Spring. In a previous post about Beebe lake in Ithaca, I noted that there is a harmony in nature, specifically through the photograph of the 2 geese in the center of the photograph. Observing the geese travel in pairs was heart warming because it shows that they may feel emotional connections to each other just as we do. This conveys that they have an awareness of predators and knowledge about the place they are in.

This is an image of two ducks traveling in pairs in California, like the geese in Beebe Lake. The relationships between the ducks was more visible to me, and it was so charming! 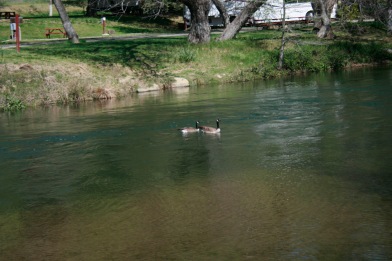 I first observed that all of the ducks were clustered together at one end of the river and noticed that the river’s current was pushing them in that direction. Then I saw two ducks fly across the river to the other end of the river where the stream began. I was so excited because it seemed like they were going to the other end so that they could have fun together being carried down stream. The photograph is the ducks on their voyage back down stream with the rest of the ducks. Like the geese in Ithaca, these ducks have a strong sense of place. They know which way the current flows, take caution by traveling together, and also enjoy the experience.

It is also interesting to see how landscapes can differ across the country from one day to the next. The green and blue photograph was taken between Lake Berryessa and Davis CA on Sunday March 24. The grey toned photograph was taken between Candor and Ithaca NY on Monday March 25. We can see stark differences between these landscapes based on the weather and foliage.

We can see symbols of human intervention in both photographs. Signs of people are more obvious in the New York photo since there are electrical wires running across and homes in the distance. Although the California photo appears like it represents “pristine nature,” it is only partially “pristine.” The area is recreational and we can see a symbol of this land’s true identity in the foreground where there is no grass. The land has designated areas for visitor parking.

This conveys that people intervene within presumed “remote” natural areas, and ties in with McKibben’s assertion that no real nature exists without human intervention.